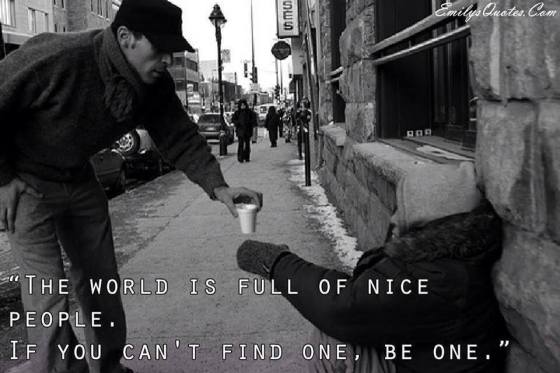 I’m a firm believer that in spite of the negativity constantly being shown on TV, social media, and newspapers that there is good in the world.  I refuse to believe or accept that we are all so horrible, narcissistic, hedonistic, selfish, and self-indulged that we aren’t doing for those who can’t do for themselves.  I do accept that there are many that don’t want to be helped, but conversely, there is a large portion of the under privileged that do want help and will accept help if it’s offered without prejudice or duress.

I purge my house quarterly and donate unneeded items to charities that do dispense the items to those in need instead of taking said items to a donation center that in turn sell the items I’ve donated.  I don’t mind the resell per se, but I’d rather the items be given and not sold.  If that was the case, I’d have had a garage sale and kept the proceeds.  In addition to making donations, I like to give of my time when possible to help someone in need.  In fact, I’ve just given myself an idea of what I can do with some of my time.  Since I enjoy cooking and or entertaining others, I’m not only going to donate soups and complimenting food items to the local church that feeds people once or twice a month, I’m going to make soup to donate and serve it.  Simply cooking and donating does not complete the cycle of what I want to do for others.

I’m going to pay it forward whenever it’s possible for me to do so.  I’m going to fill out surveys and compliment the person who provided great customer service.  I’m going to pay for an ‘add-on’ item for someone while I’m dining out or buying coffee when financially able.  I want to ensure that I’m a positive reflection in someone’s day; especially for those service jobs where they’re rarely thanked for what they do; the gas station attendant (in NJ anyway) or the cashier in the supermarket for example.

If more of us dispensed a smile, a pleasant salutation, a thank you, or anything where a polite word or gesture can and would make a difference, I truly feel that we would make a difference in someone’s day and that extended act of kindness will return to us.  Not that there should be a reward for doing good, but there scientific and Biblical evidence of this to be true.

This weeks challenge is to do something nice for someone else without prompting for 7 days and let me know how it made you feel; whether you did it with or without someone’s knowledge of you being the giver.

Yea, I said that!

Do you think I can Crowd Fund for a vacation?

I really want Kim K. and Kanye to just GO AWAY 😕

As much as I like music, I’m having a really hard time with ‘black’ music these days *sigh*

Weight loss is easier said than done; though I can’t really gained any

I want to do more with my time

I was asked to participate in doing a video interview about Self-Mutilation and while I’m okay talking face to face with people, I’m no longer sure about it being YouTube

The Word comes RIGHT ON TIME…Thank you Jesus! 😀

Have a good weekend! ❤

where I spoke about relationships as we create them to be and what they actually are.

I’m still reading the book: The Adventures of a Love Investigator, 527 Naked Men & One Woman – Barbara Silkstone that inspired the post and the more I read it, the more I see how and why so many relationships thrive or fail. I’m encouraged that the men are speaking so freely, openly, and honestly to the women interviewing them because they’re speaking truths; albeit their own, but it can be a truth none the less.

I think of this statement, “How do you take the first steps toward divorce? You marry the wrong person.” I can’t tell you how true this is. I did it. The writing was on the wall in my marriage from the very start. I was involved with a man who was cheating on his wife. He also cheated on my while cheating on her, which should have been enough for me to let him go, but I thought I was completely in love with him and he thought the same. Writing these words, Tina Turner’s ‘What’s Love Got To Do With It?’ Comes to mind and I laugh a sad laugh because it’s true. Love can very often be exactly what you want it to be and in my case, I wanted it to be him. I’d had a crush on him since I was 19, but avoided a relationship due our eight year age difference and I was months shy of starting my military career, which would and have to take precedence over a relationship. Years later, we came back into each other lives and I thought it was fate for us to be together, but it was yet another left turn. When we finally became a couple it was almost founded on duress after a close mutual friend told him I was too nice a girl to waiting around and certainly didn’t deserve to be a side piece.

Long story short, all the signs that I’d previously ignored shone so brightly they couldn’t be ignored anymore and after some initial trying, we couldn’t make it work and divorced. The ironic part of it all is that he and I were such good friends initially and we seemed like one of those couple who’d remain friends even after a break up, but that wasn’t to be. The absolute saddest part of it all was/is all the things he initially loved about me, became all the things he grew to hate; hence, the opening quote.

I know quite a few people I’ve had to have the “good people aren’t always good together” talk with based on my own experience, common sense, and that state of their relationship. We have to learn that signs are there for a reason. They’re God’s little whisper to us to pay attention, but given that most of us are completely hard-headed, we ignore the signs, forge onward, and then wonder “how did I get here” too late after the fact.

I’ve learned the importance of knowing myself before entering into a relationship because I didn’t want to be one of those “women..guilty of inserting themselves into the man-puzzle when it suits their agenda…” which so many, many women do. It’s a tremendously bad and damaging position to hold and she’ll ultimately do more harm than good in the relationship. I’ve also certainly taken every effort to know whom I’m getting involved with. My Love and I didn’t have it easy in the beginning, but with time, patience, and lots of open and honest dialogue we saw through the issues to make things work. I hold no fantasies of what our lives could and would be, but accepted the reality of our many differences, life experiences, and life goals, which are far more important. I reserve fantasy for my celebrity crushes! 😉

I Wish I Had Breast Cancer

Please take a moment to get over the title of the link and then read content therein before choking on the words. *sigh*

Given that I’ve had cancer; Breast Cancer specifically, I was a bit taken aback by the campaign’s message until I read it. Those who have not had cancer; especially a rare or low survival rate cancer can’t begin to fathom what goes through the mind of the person who does. A very close friend of mine has Appendix cancer, which is extremely rare with a very low survival rate. She was given five years to live once diagnosed and praise God that she’s out lived her prognosis; however, last fall she was told it had come back. She’s doing well and is responding well to the treatment she’s under; however, given an option, she’d rather have been diagnosed with a cancer with a greater survival rate. No, this is not me speaking for her; this is me speaking her words. Like that campaign indicates, no one wants a cancer diagnosis, but would always opt for more curable one. Sadly, even the more curable ones still come with a death sentence depending on how well one responds to their treatment. Ultimately, no cancer is a good cancer.

When I was diagnosed, I was informed that my chances for survival were extremely high since it was caught before it spread out of the breast itself in spite of there being two tumours; one bigger than the other. During the course of my treatment, I often heard “if you’re going to get breast cancer, the one you have is the best one to get”. Really? Again, NO cancer is good cancer. For me, I underwent a mastectomy where my right breast and supporting muscle was removed and later replaced with an implant. The many surgeries I underwent during reconstruction and the ensuing medicine I was prescribed was harrowing; especially that latter which severely compromised my quality of life. How is that good? Seven years later I’m still here; still strong and still standing. All praises due!

I’ve argued with many doctors during the various conferences I’ve attended and other breast cancer patients/survivors that my cancer was still a cancer and should not be demeaned in any way. I begged them to stop telling women that their diagnosis was “the one to get” because there is no cancer competition that anyone would enter for. I’m honestly conflicted about the campaign; truly I am, but sadly, I do understand it in spite of my own experiences and opinions.

In closing I’ll say this, if you have an opportunity to or want to volunteer yourself for a community service, please consider the American Cancer Society as an option. Where able, offer to drive and sit with someone through their treatment. Provide food, your companionship, and time to aid in their healing, trust me being avoided or left alone during that time is awful. In addition, please don’t undermine anyone’s cancer regardless of the stage. NO cancer is a “good” cancer!

Yea, I said that!

As you know, I’m a huge music person and I’m rarely in favour of covers, remakes, or renditions.  In my opinion, there are few artists capable or recreating the original to such a degree that warrants interest from me; although I will say, there are startlingly a few artists that have done better than the original…Gasp! Anita Baker killed Tyrese’s Lately.

Well, it turns out that Marsha Ambrosius; formerly of the duo Floetry, decided to remake the Sade classic: Love is Stronger Than Pride.  In the world according to me, it takes a brave person to think they can take a Sade song and make it their own and I think Marsha considers herself brave.  I can’t say I dislike the remake, but I’m not sure how much I like it either. I think the subtle change in arrangements with a heavier emphasis on the percussion’s is nice, but it comes off a little too hip-hop for me.

The video is sexy and I enjoy the double entendre of being in black and white given Marsha is bi-racial and uses a white man in the video; however, her hip-hop body movements and girl-thug demeanor kind of conflicts with the sexiness of the bedroom scene.

Take a look/listen and give me your take…Pass or Play?